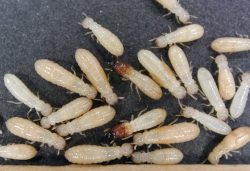 I told you in earlier issues that the temperatures would be rising and along with that, termite and ant swarms would be starting. Like clockwork, the little devils have been on the radar for about a month now, with ever-increasing numbers of calls pertaining to either suspected termite or carpenter ant infestations occurring.

Many times customers will think they have termites when in fact the problem is an ant colony in the wall producing debris called “frass” which usually consist of wall material and insulation along with particles of dead ants and other trash. Carpenter ants are probably the most commonly occurring wood destroying insect that we deal with on a regular basis. In fact, I have said,”There are two types of homes out here in the Hill Country, one that has carpenter ants and one that is going to get them!” One good thing though is that the damage they produce is usually minimal and they are usually easy to control. The best way to prevent them is to not let trees or bushes touch your home and prevent water damage from either rain or plumbing leaks. Also keeping your gutters and roof clean from the leaf debris that builds up and holds moisture providing a suitable habitat.

When termites are involved, usually it is the native or Eastern Subterranean Termite that is the culprit. Unfortunately they are not usually discovered until they have been at work for some time, with substantial damages being done to the structure of the home. Subterranean means that the colony is in the ground and the termites in the house need to be in contact with the soil, that is why you will find dirt in the areas they are located. Eastern Subterranean is the most common species that we find here with a broad range of activity.

An invasive species, Formosan Subterranean Termite is a formidable foe, with staggering statistics. As of 2015, the distribution of Formosan subterranean termite in the United States includes Alabama, Florida, Georgia, Hawaii, Louisiana, Mississippi, North and South Carolina, Tennessee, and Texas. A single colony of Formosan subterranean termite may contain several million (versus several hundred thousand termites for native subterranean termite species) that forage up to 300 ft in soil. With increased colony sizes and larger foraging areas, one colony can threaten multiple structures. Along with structures being at risk, this species will attack healthy living trees resulting in hollowing out and weakening of major limbs resulting in possible property damage.

Dry Wood Termites are not that common in our area however they are around and are most commonly found in imported furniture or exotic woodwork They are usually found in the humid coastal subtropical regions. They usually infest attic spaces or exterior wood members exposed to them when they swarm in early spring or summer. With no need for contact with the soil, they are one of the most difficult to discover and eradicate.

Powder-post beetles are divided into four families: Lyctidae, Bostrichidae, Anobiidae, and Cerambycidae. The adults do little damage, it’s the larvae that does the major part of the damage. They have a complete metamorphosis life cycle: adults, eggs, larvae, pupa. They infest hardwoods and produce a fine powdery dust as they tunnel through the wood. They do digest cellulose and wood fibers.

Carpenter bees don’t eat wood but do feed on plant pollen and nectar; however they do excavate dry, unpainted and weathered wooden objects such as windowsills, doors, roof eaves, decks, railings, fences and wooden lawn furniture. They prefer pine, fir, cyprus, oak and redwood, especially if the wood is not covered with bark, is unpainted or unfinished. Large carpenter bees will sometimes bore into painted wood, especially if the paint covering is old and weathered. They are usually only noticed around April or May when the brood leaves the open cells.

With all of these and most other pests, the old saying rings true; “An ounce of prevention is worth a pound of cure.” Proper upkeep of your home looking for wood rot or water damage goes a long way. If building a new home, a pre-construction termite preventative treatment is wise and much less expensive than a post-construction termite curative treatment having to be done after the damage is done. Having a regular pest control service being performed with a trained professional going around your home also helps to catch things before they become big problems. 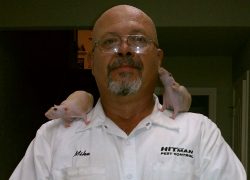 This entry was posted on Wednesday, May 4th, 2016 at 4:44 pm and is filed under Pest Control. You can follow any responses to this entry through the RSS 2.0 feed. Both comments and pings are currently closed.